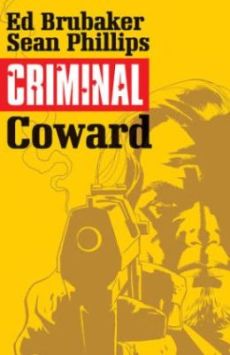 Ed Brubaker and Sean Phillips’s Criminal is a delightfully unpretentious crime series: it unabashedly embraces its noir roots, unembroidered by cheap theatrics or anomalous twists. Its various volumes, now published by Image for the first time in redesigned editions, are imbued with its creators’ regard for the genre, and represent the pinnacle of their respective careers. Coward is our entry into this dark, rain-drenched, graffiti-daubed world; professional thief Leo is our guide.

Leo is a criminal who knows when to walk away – or run, in the worst case scenario – from a job. And because of his proclivity for caution – his determination to survive – Leo has been dubbed a coward. And he’s okay with that – mostly. Because ultimately, he’s still here, while many of his friends are not. So now, five years after his last big heist went terribly awry, Leo works alone, pulling small jobs; enough to get by financially, and support his father-figure’s drug habit. It’s not a happy life, but he’s living, and for Leo, that’s enough. Of course, things soon change when figures from Leo’s past return, bringing him back into the fold: a big job with a massive payoff, surely too good to be true. But Leo should’ve trusted his reservations and walked away. Because there’s nobody you can trust less than a cop on the take; especially one with nothing to lose.

Coward reads like a Parker novel (although Leo isn’t quite as menacing as Richard Stark’s protagonist) – fast-paced, populated with a menacing cast, and punctuated with moments of brutal violence; vicious, but not gratuitous. Brubaker, Phillips, and Val Staples on colours, are operating at their zenith, demonstrating harmony on the coloured page. There is no better crime comic than Criminal; there are few better crime stories than Coward, period.