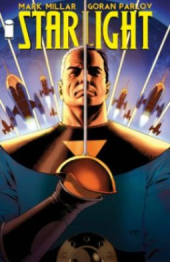 Starlight is an action-packed throwback to the cosmic swashbuckling adventures of Buck Rogers and Flash Gordon, but with its own unique twist.

Forty years ago, United States Air Force pilot Duke McQueen was inadvertently transported to the world of Tantalus, which is suffering under vicious tyrannical rule. Taking matters into his own hands, he single-handedly rescued the planet from its dictator, Typhon, thereby cementing himself in their lore: an eternal legend in their eyes. Duke returned home, a hero in the eyes of millions – but considered a delusional chump to people back home. Unfortunately our planet doesn’t receive intergalactic media transmissions…

Only his wife believes his stories, but at the very start of Starlight she has recently passed away, leaving Duke alone, with nothing but his fading memories, and two aloof sons. Writer Mark Millar and artist Gorlan Parlov excel at highlighting Duke’s insolation, and his status as the punchline for cruel ‘senile old man’ jokes. It’s impossible not to feel sympathy for this unrecognised hero, who doesn’t demand adulation for his exploits: just respect.

Then a rocket ship lands on his front lawn, and a twelve year old boy from Tantalus calls Duke back into action. Turns out he didn’t save the faraway planet of Tantalus when he disposed of Typhon – instead, he left their world free for the taking. But does Duke still have it in him, forty years later, to be the hero the planet needs?

Mark Millar has always excelled at those ultra-cool action-packed moments, but sometimes they’ve come at the detriment of the narrative: all flash, no meat on the story’s bones. With Starlight he takes a different approach, with a tighter focus on character, while still allowing room for those iconic moments, which are spectacularly rendered by Parlov, whose work here eclipses even that of Fury: Max. Duke McQueen is a brilliant protagonist: the archetypal fear-nothing-in-the-face-of-danger tough guy, whose only weakness is his inner turmoil, and his disenchantment with life back home. He’s backed up by some fun secondary characters, and ludicrous villains, who are just begging to be punched in the jaw.

Starlight is just fun. It’s a light-hearted space adventure story with plenty of heart. Bring on the sequel.