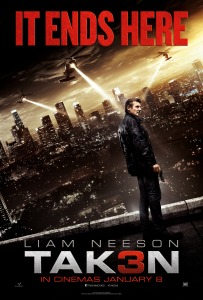 Taken is one of my favourite action flicks, right up there alongside The Rock, Die Hard, Con Air, Face/Off  and The Terminator. But unlike Die Hard, which had a couple of decent sequels, and The Terminator, which is the one franchise I’m willing to debate whether the second film was better than the first, Taken’s follow-ups have lacked the lustre of the original. Taken was sharp and brutal; dark and bloody. Its sequels are bloodless, limply-scripted rehashes of action movie set-pieces. They’re a mess, salvaged only by Liam Neeson’s on-screen appeal; and aided in this third installment by Forest Whitaker, who plays a tic-savaged unconventional detective named Dotzler.

Taken 3 is essentially The Fugitive with the action jacked up to the nth degree. Framed for the murder of his wife (given the spoiler-filled trailer, that’s given nothing away) Bryan Mills goes on the run from the police, led by Whitaker’s Dotzler, both of whom follow various investigative threads to uncover the identity of the true killer. Meanwhile, Bryan’s poor daughter, Kim, is once again the target of killers, all the while dealing with a personal crisis of her own (besides her mother’s murder, naturally; the poor girl can’t catch a break).

The plot is overly complex, although it makes sense (just), and scripters Luc Besson and Robert Mark Kamen do their utmost to spice up proceedings with extravagant set-pieces and emotionally nuanced moments, none of which truly pays off. Sure, there are fisticuffs and shoot-outs, and car-chases; but set in Los Angeles, a locale that’s been done to death, it’s all a bit dull. Perhaps director Olivier Megaton could’ve done something to alleviate the film’s staleness; perhaps it was inevitable because of the script. One thing that certainly doesn’t help is the obliteration of the franchise’s maturity. I’m not just referring to blood – although there’s mysteriously none of that here, which is ludicrous given the number of shell-casings that litter each location – but the sheer lack of vigour evident in the action. Where’s the brutality we saw in Taken? There’s no crunch to these punches; no oomph. The action is sufficiently choreographed; but Taken was never about that; it exposed the viciousness of combat, demonstrated its dirtiness. Events in Taken 3 occur with an overstated sheen.

There is a moment, at the midway point of Taken 3, when an LAPD cop tells Bryan that things are going to end badly for him. He retorts: “Don’t be such a pessimist,” (which is perhaps supposed to be a quip; suffice to say, there was nobody in my packed cinema who chuckled). It’s hard not to be, assuming there is s a fourth film in the franchise (despite assurances this is, in fact, ‘the end’). Taken was a fantastic action flick that stood perfectly alone; a shining beacon in a franchise-saturated market. Now, it has become a parody of its former self. Once, people pumped their fists at the mention of Taken; now they roll their eyes; puns inevitably surface: “Who will be taken this time?” It’s a damn shame. I just hope it’s left alone now.