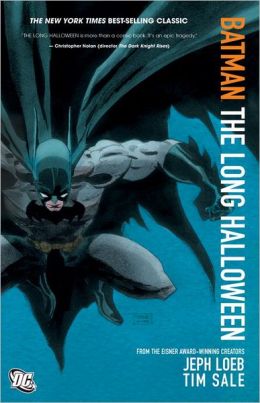 BATMAN: THE LONG HALLOWEEN spans the Dark Knight’s year-long investigation into a serial killer striking at the heart of Gotham City’s organized crime families. Wielding a silenced .22 calibre pistol, the killer strikes only on holidays – Valentines Day, Mother’s Day, Christmas, and so forth – and is quickly dubbed ‘Holiday’ by the press. Of course, Gotham being a city infested with psychopaths, this new killer stirring the pot arouses the attention of several of Batman’s nemeses, including Joker, the Riddler,  Catwoman, Solomon Grundy, and more – all of whom play varyingly integral roles to the overall narrative. But at its core, THE LONG HALLOWEEN is a mobster saga about the lengths good men will go to in order to defend the values they hold dear; and easy it is to overstep the boundary between good and evil.

Jeph Loeb and Tim Sale, now recognized as a true dynamic duo of comics, might’ve reached their apex with THE LONG HALLOWEEN. The two combine perfectly to deliver a dark, action-packed snapshot into a year in the life of Batman, centred on the Holiday killer. We see relationships develop and change over the course of the story; the seemingly unbreakable partnership between Jim Gordon, Harvey Dent and Batman begins to show signs of decay as the tale progresses, and the death toll rises; and Bruce Wayne and Selina Kyle / Batman and Cat Woman flit between potential lovers and fighters. Tim Sale is one of the definitive Batman artists; his style is distinct and unparalleled, and he perfectly captures the break and moody atmosphere of Batman’s world. Loeb’s script is tight, and he encapsulates the various personalities with aplomb. The mystery – who is Holiday? – is unsolvable with the clues provided in Loeb’s script, which might be considered a fault, but doesn’t take anything away from the joy of watching it unravel.

THE LONG HALLOWEEN is hailed as one of the finest Batman stories of all times – high praise indeed, but deserved. Loeb and Sale strip the character down to his fundamental elements – a superhero detective – and weave a fascinating mystery with a satisfying ending.