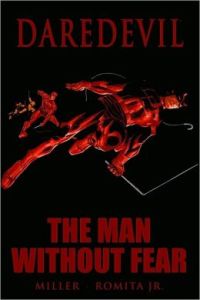 In my youth, Daredevil never ranked highly on my list of super-heroes. I started reading comics in the mid-nineties, and was only ever exposed to the character in team-ups with Spider-Man; and that was plenty. I didn’t seek out any more Daredevil stories, and for many years was contented with my decision. Besides, DC Comics was where my head was at; Superman, Batman and Green Lantern, rather than the Marvel universe.

But as years passed, I began to hear whispers about Frank Miller’s run on the series – a creator I knew exclusively through his seminal work on Batman. Even that wasn’t enough to sway me, though my interest was undeniably piqued. Then came Brian Michael Bendis’ take on the character, quickly followed by Ed Brubaker’s – two of my all-time favorite writers in comics – whose creative powers enticed me into the world of Matt Murdock; and from there, I delved backwards, powered through Miller’s Daredevil work.

I’ve been reading the character ever since.

Lately I’ve been reading several origin stories, purely by happenstance rather than design. THE MAN WITHOUT FEAR was originally a five issue limited series by Frank Miller and perhaps my favorite artist in the business, John Romita Jr, which detailed Daredevil’s origin. The best thing about it is that it’s purely character-focused; Murdock doesn’t appear in costume until the very end. This is the story of the man behind the mask, and the failures and successes that drove him to don the spandex.

Raised by a single father, an over-the-hill prize-fighter whose sole objective in life is to see his son live a better than life than he has, Murdock’s life is irrevocably changed when he’s blinded by radioactive materials while saving the life of an old man. This radioactive material enhances Murdock’s other senses, however – and with the aid of the enigmatic Stick, he learns to control and heighten these developed senses even further. Despite his lack of sight, Murdock is trained, and becomes, the ultimate warrior; but THE MAN WITHOUT FEAR exposes his lack of discipline when an innocent is killed through his actions, and the long path towards attaining it.

Miller utilizes a terse third person narrative in THE MAN WITHOUT FEAR; from the keyboard of a lesser writer, these captions might seem overbearing, but Miller is no rookie, and he encapsulates the perfect tone, hints of noir tinged with a super-hero flavour – a difficult balance. Coupled with Romita Jr’s artwork – which has never looked better – it’s stunning collection, which perhaps doesn’t quite hit the heights of Miller’s ground-breaking BORN AGAIN, but comes awfully close.