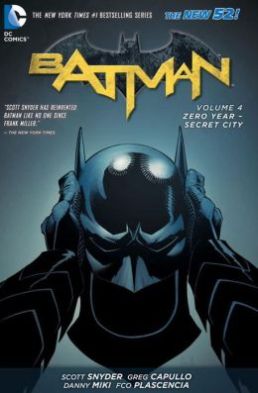 Frank Miller and David Mazzucchelli’s BATMAN: YEAR ONE was a seminal work in the Caped Crusader’s history, which still resonates today, and remains one of my favourite Batman stories. But YEAR ONE is almost 30 years old now, and comics continuity is fluid, punctuated with spasmodic rehashes of identical concepts for each supposed ‘new generation’ of fans. ZERO YEAR marks Scott Snyder and Greg Capullo’s shot at ‘redefining’ the Batman origin story – and this collection, subtitled SECRET CITY, is the first part of their magnum opus, which immediately stands apart from the multitude of origin stories that have littered the Dark Knight’s existence. Miller and Mazzucchelli’s YEAR ONE was dark, grimy and gritty –Snyder and Capullo’s is not as overwhelmingly bleak, and strives to be more epic in scope.

BATMAN: ZERO YEAR – SECRET CITY introduces us to a decimated Gotham City; overgrown, its subway system under water. Even Batman is feeling the effects; our first introduction to him is iconic, posed on his motorcycle in a battered costume; sleeves torn, cape replaced by a backpack stocked with survival gear. The story then immediately shifts backwards again, to five months earlier, where a vigilante Bruce Wayne – yet to adopt the cape and cowl, instead utilizing fundamental disguises – has confronted the Red Hood, the madman who has been terrorizing the city through random acts of violence. We learn that Bruce has only recently returned to Gotham, but hasn’t yet revealed himself: he’s still legally dead, and wants to keep it that way: he doesn’t believe Bruce Wayne has a role to play in Gotham’s resurgence; the city can’t be saved through the ideologies of a billionaire.

SECRET CITY spotlights Bruce’s skirmishes with the RED HOOD, and his gradual implementation of the Batman identity.  Writer Scott Snyder excels at capturing Bruce’s young, petulant voice – he’s not the confident veteran we read week in and out; he’s inexperienced and unprepared, but cocky. He’s a man on a mission, without the means or the mentality to accomplish his objective, and here we see him fail multiple times; one of those failures is particularly brutal, as the Red Hood and his crew tear into Bruce and vandalize his home. Snyder’s pitch perfect script is wonderfully rendered by Scott Capullo, who must now rank as one of Batman’s finest artists. He doesn’t just perfectly capture those iconic action set pieces – the quieter moments are rendered with equal expertise. Artist Rafael Albuquerque is also on hand for the shorter anecdotes at the end of this volume, which demonstrate a teenage and twenty-something Bruce Wayne learning essential lessons that’ll stick with him through his crime-fighting career.

BATMAN: ZERO YEAR – SECRET CITY is a fine start to start to Batman’s new origin, and ends, as you’d expect with a cliff-hanger, which potentially revitalizes one of the villain’s from Batman’s rogues gallery. It’s the perfect jumping-on point for newcomers, while long-time readers will find this origin tale explores a very different side of the Batman mythos. At this stage in my comics-reading life, I’ve read several origin tales, some of which live long in comics’ continuity, while others quickly fade. There is no chance of the latter in this case.