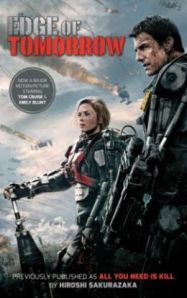 EDGE OF TOMORROW is a fantastic sci-fi action flick, the kind of summer blockbuster I love, detached from the countless super hero films bombarding cinemas. The Tom Cruise / Emily Blunt blockbuster is adapted from Hiroshi Sakurazaka’s novel ALL YOU NEED IS KILL, and makes vast changes to the source material. The film utilizes the novels’ central premise, borrows character names, and discards the rest of Sakurazaka’s content. I rarely side with the filmmakers on these matters – but in this case, EDGE OF TOMORROW benefits from its departure. Because while ALL YOU NEED IS KILL is a fast-paced, adrenaline-fueled romp, it lacks the richness and dry wit of the film’s screenplay. Whereas EDGE OF TOMORROW will live long in my DVD collection, ALL YOU NEED IS KILL is almost certainly a onetime read. Bite-sized entertainment, but sadly, a novel that won’t live long in my memory.

EDGE OF TOMORROW draws obvious comparisons to Groundhog Day, albeit a Groundhog Day with guns, explosions and aliens. Sakurazaka explains at the back of ALL YOU NEED IS KILL that his inspiration was video games, and the cyclic nature of them: start a level, die, start again and use what you learned from your previous attempt to overcome that section – Live, Die, Repeat. In ALL YOU NEED IS KILL we are introduced to Keiji Kiriya, a new recruit in the United Defence Force, which fights against the alien threat besieging Earth. Kiriya is killed in his first battle, but inexplicably wakes up to the day prior to that battle; caught in an incessant loop, which he uses to cultivate his skills and become a true warrior. The narrative is propelled by Kiriya to change his fate – made more complicated by the introduction of the enigmatic Rita Vrataski, the ‘Full Metal Bitch,’ and a legend on the war, who has herself looped through time, and is the only other person who understands the phenomenon afflicting him.

Sakurazaka touches on the psychological impact of being trapped in a recurring time loop, but not with any great depth. It would’ve been fascinating exploring Kiriya’s psychosis as the number of loops accumulated – but that’s not what ALL YOU NEED IS KILL intends to be. From the very first page we understand this is an action novel, with no place for lethargic exposition and elongated evaluations of Kiriya’s evolving mentality. It’s a fine sci-fi action novel, a quick read, and has enticed me to seek out other works by Sakurazaka.