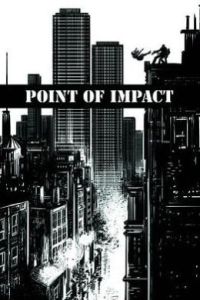 There is a lot to like about POINT OF IMPACT by Jay Faerber and Koray Kuranel. Its first chapter in particular hints that it might be something very special indeed, aided by stunning black-and-white visuals and concise dialogue. It hits the ground running with the murder of Nicole Rafferty , killed in dramatic circumstances – thrown from an apartment building – and quickly introduces the key players, deftly unravelling plot twists and surprises. Nicole’s murder is investigated from different angles by two detectives, her journalist husband, and her ex-soldier lover, and by the end of the fourth chapter, these separate investigations converge. Unfortunately, by that point, the early promise of POINT OF IMPACT has dissipated, and we’re left with an entirely satisfactory, but totally forgettable crime comic. Kuranel’s artwork never fails to impress. His storytelling is clear, and at ones, particularly when allowed to play with page layouts, effortlessly dynamic. The shot of Boone, the ex-solider and Nicole’s lover, leaping between buildings, is absolutely stunning, and worthy of framing on some lucky collector’s wall. But the artwork is too often let down by a flagging script. Dialogue such as, “This job would be a lot easier if everybody told the truth,” uttered by one of the detectives, is worthy of an eye roll. Worse still, the crux of the plot is explained with such an extreme lack of clarity, I almost put the book down: “One of their products isn’t safe. It looks safe, and it passes the FDA’s tests, but we have internal research showing that it’s not safe. So much money was invested in this product…” and so on. We never learn what this ‘product’ is, which was a piece of ambiguity that truly irks. Ultimately, the name of the product has no real bearing on the plot – but repeatedly labelling it as ‘the product’ suggested overt nonchalance, and that’s one thing I can’t stand. Then there are the manufactured climactic scene endings. In two instances, scenes end with gunshots, and the identity of the shooter(s) and victim(s) are concealed from the reader – this being a visual medium, it’s easy to pull away. Again, there’s nothing wrong with this practice in theory, or indeed its execution in POINT OF IMPACT – but to do so twice in the space of less than fifty pages highlighted a lack of originality.POINT OF IMPACT is a great vehicle for Kuranel’s artwork – less so for Faeber’s writing. Those looking to explore his work – and you should, truly, despite the negativity laced throughout this review – should check out NEAR DEATH, a short-lived crime comic with a great twist, or NOBLE CAUSES, an innovative superhero series. POINT OF IMPACT is a flawed crime comic, elevated by great artwork. You’ll have to decide whether that’s enough to sustain your interest through some of its rougher patches.