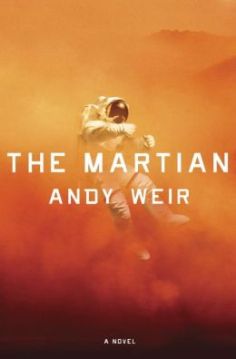 THE MARTIAN by Andy Weir is a pulse-pounding survival tale about an astronaut stranded on Mars, cut off from Earth and believed dead (thereby eliminating the possibility of a rescue mission), with only his wits and threadbare equipment as his companions.

This is hardcore sci-fi; the story is supported by science grounded in quasi-reality, and told through traditional third-person narrative, but predominantly through first-person logs. Mark Watney is our astronaut-in-exile, and he’s a likeable guy: a botanist with a dry sense of humour, oftentimes goofy, despite the precarious scenarios he’s faced with. Weir perfectly blends the science with humanizing moments, weaving a tale that’s blissfully deprived of a ‘bad guy,’ and instead focuses on placing poor Watney in a wide range of circumstances instigated by mechanical failures, pure bad luck, and the unavoidable hazards of his environment – all of which require lateral thinking to escape from.

The final chapter is the most nail-biting prose I’ve read in a long time. Weir constantly dangles salvation in front of Watney, and then whisks it away. But it never feels like Weir is cheating and manufacturing events for the sake of thrills. Watney is never safe, and the final chapter of THE MARTIAN will see many readers biting their nails until the final page is turned. There is a moment, close to the very end of the novel, where Weir becomes a tad heavy handed with the ‘message’ of his story – a section that, purely in this reviewer’s opinion, could have been completely stripped – but it’s not enough to tarnish what is truly an enthralling novel.

Even if science fiction is a genre you tend to disregard, THE MARTIAN is well worth your time. It’s a survival story about a man you’ll grow to love and admire; it’s a cautionary tale, and a salute to the men and women who fly to the cosmos for the benefit of mankind.

One thought on “Review: The Martian by Andy Weir”