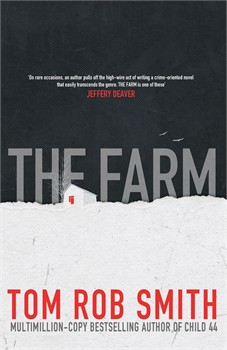 The greatest threats to our happiness often exist in the most idyllic of settings, and stem from those closest to us. Our wellbeing is shaped by friends and family; our community, both nearby and abroad. They are essential cogs in the machinery of our lives. Without them, we fall apart. We become isolated and desperate. Most crushing of all is when one of our most trusted confidants betrays us. Losing friends and family is an unfortunate reality of life. But the cognizant act of betrayal stings the most. It opens the kind of wound that can never truly heal. The kind of wound that makes us desperate and act irrationality. It is the kind of wound that forces Tilde to confront her son, Daniel, in London, about brutal crimes that transpired in her native homeland, Sweden. Crimes she believes her husband – Daniel’s father – was involved in.

Tilde claims to have evidence: proof of wrongdoings, and a shortlist of suspects. She is certain there is a large conspiracy working against her, of which her husband is a part, trying to hide the truth. She has no one else to trust. No one but Daniel, her only son. She assures him that all she wants is his ear: for him to listen and form his own conclusions. But for Daniel, it’s not as simple as that. Because mere hours before Tilde arrived, he received a phone call from his father, still on their farm in Sweden, during which he revealed Tilde had been committed to a mental hospital – and has somehow escaped.

The burden is solely Daniel’s: can he believe his mother? Can his father be trusted? What exactly happened on their farm in Sweden? And how far is he willing to go to expose the truth?

THE FARM is a novel about isolation and the disintegration of relationships. It is bleak read, but compelling throughout, as Tilde lays out her narrative piece by piece. It’s an extraordinary narrative structure: the novel consists mostly of dialogue between mother and son. It could be reiterated as a radio drama, if the voices were able to transmit the necessary gravitas. The rigidity of the novel’s arrangement is interspersed with deeper insights into Daniel’s life, our narrator throughout, who has secrets of his own, and which gradually come to light.

The pace never lulls. Not a single sentence is wasted. Author Tom Rob Smith demonstrates his literary finesse, weaving a complex tale with brilliant discipline. This is a perfect thriller that doesn’t rely on end-of-world scenarios and hyperbolic threats. It is about relationships, and how ultimately capricious they are: the kind of notion that’s sure to keep you up at night.

One thought on “Review: The Farm by Tom Rob Smith”