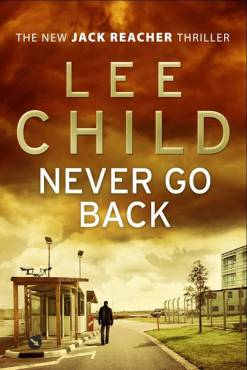 Lee Child’s 17th Jack Reacher novel, A WANTED MAN, suffered from a major tonal shift in its third act, which had Reacher in full John McClane mode, blasting away at a facility full of bad guys, facing odds that seemed just a tad too insurmountable. For the first time, Reacher flirted with the dark abyss where archaic action heroes go to die. He hadn’t yet fallen in, but he was close, right there on its edge, one step from oblivion.

With NEVER GO BACK, Reacher has leapt away from that black hole. His feet are firmly planted on the ground. He’s safe. He’s secure.

Jack Reacher is back, baby.

NEVER GO BACK sees Reacher return to his old unit, the 110th MP – but not the way readers will expect – and he’s immediately thrown into a complex conspiracy that dates back to his previous stint as a military cop. It’s an intricately plotted mystery, punctuated by moments of classic Reacher violence and humour – which often occur simultaneously. It’s been an epic experiment by Lee Child – three of his last four novels (excluding THE AFFAIR, which was based in the past) – have taken place in close proximity, detailing Reacher’s long journey to meet Major Susan Turner. NEVER GO BACK represents that journey’s end, and, quite rightly, Reacher feels like a changed man. The final line of the novel resonated with me for a long time, like there was a deeper meaning behind those words. I’ll be interested to hear what other fans think.

Child’s novels have always featured strong female leads, and Major Turner is one of the best. She confronts Reacher on his lifestyle, questions his choices, and wonderfully never falls into the role of damsel in distress. Reacher and Turner are a potent duo, and I wonder, with references made to Reacher’s age – early on he’s referred to as “old man” – whether it’s possible Child might one day return to her. I’d certainly be open to it. But it would be foolish to think Reacher won’t still be kicking butt when he’s in his twilight years.

My fears expunged, just like the old days, I’m counting down the days until Child’s next release.