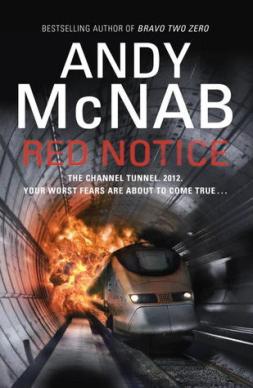 RED NOTICE feels like Andy McNab trying to straddle the fence between his raw, expletive-laden Nick Stone series and his more recent efforts with fellow author Kym Jordan, which pack far more of an emotional pull and realism into its pages. Unfortunately the result lacks the impact of both. RED NOTICE is little more than an adept thriller. Undeniably readable, packed with plenty of action – but it’s nothing we haven’t read before.

Protagonist Tom Buckingham is fairly one-note – an SAS soldier struggling to balance his commitment to the Regiment and his commitment to his girlfriend. When she decides to leave him, determined not to offer him a second chance, she buys a one-way ticket on the Eurostar. Naturally, Tom chases her down, manages to board the train just as the doors close – which is, naturally, the same train terrorist Laszlo plans to hijack; the same terrorist Tom and his SAS unit failed to capture less than 24 hours ago.

The plot just feels a tad too contrived for my tastes. I understand this is fiction; coincidences will occur in order to further the plot. Certain twists just seemed a tad too methodical. There are the standard tropes thrown in for good measure; traitors in the Regiment’s ranks; Laszlo’s secret agenda – all the boxes are ticked off, just not in a particularly inspired fashion.

As the first in what is clearly intended as a new series – too many plot threads are left dangling for this to be a standalone – RED NOTICE isn’t the greatest of openers. My advice to any first-time McNab readers? Check out the Nick Stone books. For the rest of us stalwarts? This’ll do.

One thought on “Review: Red Notice by Andy McNab”